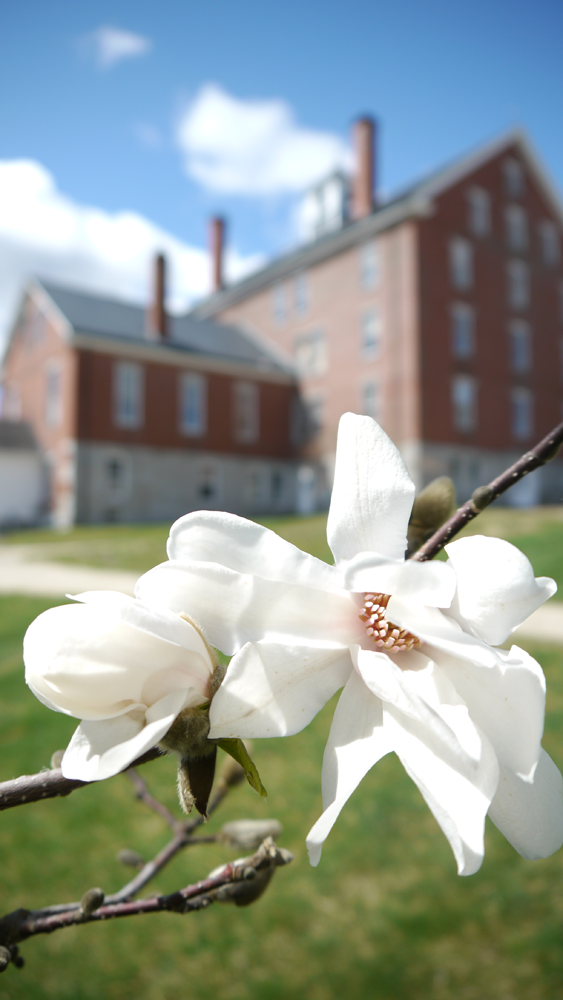 The United Society of Believers, commonly called Shakers, was founded in 1747 in Manchester, England. They were called, in derision, “Shaking Quakers” because of their ecstatic and violent bodily agitation in worship. To this group of separatists came a remarkable young woman named Ann Lee (1736-1784). In 1770, she was imprisoned for her religious views. During this time she experienced a series of visions. From that date on Ann Lee was acknowledged as their leader and known as Mother Ann.

In 1774, a decision was made to remove to America. Mother Ann and eight of her followers boarded The Mariah in Liverpool. They landed in New York City on August 6, and immediately set to work and found employment. Several went up river to a place outside Albany then called Niskayuna. They began to clear the land and erect buildings. In 1776, the little band of Believers began Community life together.

Having arrived on the eve of the American Revolution, and being not only British, but pacifists, the Shakers kept a low profile. However, the events of May 19, 1780, the famous “Dark Day,” brought their testimony to the public. Soon, hundreds of people from New York and Massachusetts were coming to see this peculiar people.

This new awareness brought not only converts, but persecution as well. The Shakers were harassed, beaten, stoned, driven out of towns and imprisoned all for religious reasons. This bitter persecution brought about the early deaths of the three English leaders, Father William, Mother Ann and Father James.

By 1787, the Church was headed by the American converts. Under the able leadership of Father Joseph Meacham and Mother Lucy Wright, the Shakers began to gather into “Gospel Order.” The first Community was at New Lebanon in New York. Eventually eighteen Communities were established in Maine, New Hampshire, Massachusetts, Connecticut, New York, Kentucky, Ohio, Indiana, Georgia and Florida. The Community reached its numerical height of some five thousand souls, during the decade preceding the Civil War.

The Sabbathday Lake Shaker Community was founded in 1783, in what was then called Thompson’s Pond Plantation, by a group of Shaker missionaries. In less than a year’s time nearly two hundred people gathered together in this place that previously had only been the home of some five farming families. The new influx of people initially made do with the existing homes and out-buildings.

On April 19, 1794, those residing here made an oral covenant with each other to consecrate their all to God and formally organized as a Community. To mark this event they began to build a house for public worship. The raising of the Meeting House was their first united venture. The next year saw the construction of the first communal Dwelling House and the next decade saw the addition of worships, mills, barns and other related buildings necessary for laying permanent foundations.

Always referred to as, “the least of Mother’s children in the east,” Sabbathday Lake was one of the numerically smallest and poorest of the eastern Shaker Communities. For decades the Community struggled to pay off debts contracted by dishonest business agents. This struggle also brought forth a very strong spiritual gift that saw the Believers through even the most difficult times.

Generally poorer and more isolated than the other Shaker Communities, this spiritual gift has ever been maintained. Today Sabbathday Lake is the only active Shaker Community. We still strive to live a life of work and worship, fulfilling the motto of our founder, Mother Ann, to “put our hands to work and hearts to God.”

The Community presently consists of eighteen buildings located on 1,800 acres of land. We maintain a tree farm, apple orchard, vegetable gardens, commercial herb garden, hay fields, pastures, a flock of sheep, and a variety of livestock. Other occupations include manufacturing of fancy goods, basket making, weaving, printing, and the manufacturing of some small woodenware.

Take a Tour – Get Involved